When I open a new tab “output” is not an option.

When you run the project by clicking ‘run’ button on top middle(bottom middle if you’re on mobile app), console and webview should appear on itself.

If this wasn’t your problem, please elaborate the issue by attaching an image to help us see the problem. 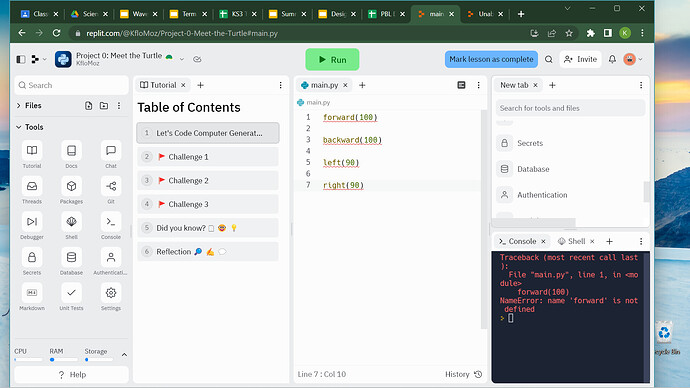 I’m using a PC and doing the " Code Art

" Project. In the first lesson she says that we should open an output tab but when I open my tab options that’s the only thing I see

Seems like project is related to turtle and hence should open webview but it isn’t happening since there is an error in console. I’m also confused as to was code in man.py limited to four commands, I have never seen them as an in built functions in python, I’m unsure of what you’re trying to achieve. 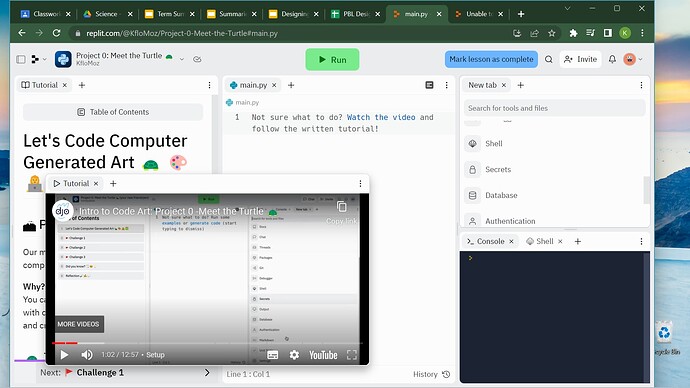 Thus far I’m not trying to achieve anything. Only getting set up. If you have a look at this screenshot You will see she instructs everyone to open an output tab. It should just be listed as a tool but it is not… So that’s where I’m stuck

(Tldr at end)
I started the tutorial myself to know what the instruction really were, I think I understand what the mistake was.
In the intro tab, when it was asked to type:

These commands are instructions to call turtle. turtle is a package and not part of python itself. Assume python as shop and turtle as product. You visit python to purchase some useful tools for your daily need, which are made by others and python sells them to you. Now you need turtle. You can purchase all the items and look for turtle in them, but it’s not wise to do so. So instead since you need only turtle you specifically select it and just purchase it alone.

Here, purchasing is equivalent of importing a package. You import a package using import keyword. Even from turtle you can cherry pick what you want like from turtle import forward. This’ll only import forward function from turtle. In your case we use * as * represents all the functions inside turtle. Also the second line Screen().setup(1.0, 1.0) is a function in turtle to set the size of output screen.

Coming back to what your problem was,

These are the functions of turtle package and won’t run if you don’t call turtle or don’t import these functions from turtle. So hence first two lines

Are improtant for output tab to appear as there is no output tab without turtle. Add these two lines at the top of your code.

TL;DR
turtle is a package responsible for output screen, add

At starting of code to make it work.