So many bots following me

Hey! I opened replit this morning and saw this… 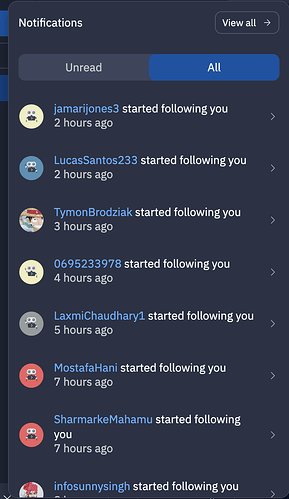 Just wanted to know if replit is creating a workaround, a captcha or somethung like that because this is getting annoying. I also want to make sure I wont be punished for these bots following me, as I am not the one that created them.

The most interesting thing about these bots… They’re not following alot of people. Just me? I have no idea why this is happening, does anybody else?

Yeah, they’re probably bots the ones that don’t have a profile picture!

Yeah and its kinda annoying lol

Weird, I have a bunch of people randomly following me and usually they are following like me and maybe one other person. Strange.

Yeah! It started yesterday just out of the blue… But sometimes theyll follow then unfollow me too. Most of them have 1 repl (blank python or bash) and are only following me. Im just tired of the spam notifications.

Ay, I followed you XD

that is definitely a valid point XD

Have they ever talked about taking away all your followings lol?

noooo, that would ruin my entire career XD.

lol, all that work for nothing

I know right, I did absolutely nothing but sit around and be lazy, tbh because I didn’t do anything I just ran a follower script.

Lol, a follower script that is now banned

yes, yes it is, don’t want you getting any ideas and stealing my position

Lol, not even close to the 18M users though

yeah, that would be pretty hard

I don’t have a profile picture on replit and i am pretty sure I am not a bot.

Which is exactly what a bot would say