Describe your feature request
I’d love to see a bug hunter badge on Replit! Now with ask a ton of bug reports are being made, and I think that maybe users could get a chance to get something if they report bugs. I think all the possible colors are already taken for badges, but there’s still orange, I was thinking of an orange badge, just like this : 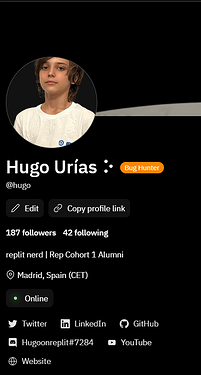 The badge uses a background color of #fb8500. Personally, I think it looks great! But getting this badge won’t be so easy, I thought that you would need at least 3 bug reports to get the badge. The bug report should be of good quality to get the badge!

I know that a whole database migration is needed, but just think about all the bugs that would be found if people get rewarded with a badge!

What problem(s) would this feature solve?
Lots of bugs, tons! People love badges, I love them, and I’m sure that people will search for bugs to get the badge. I think it’s a great community initiative; the community will search for the bugs and be rewarded for it!

Explain what you were trying to do when you came across the problem leading to this feature request
I was making a bug report, and thought that people who found bugs could be rewarded for their time!

There should be an achievment called “Insecticide” where you make 10 or so bug reports that have contributed to Replit’s status.

People who report bugs and report inappropriate content or breaches, etc, can get the Community Moderator badge and perks.

Definetly. 5 should be good enough, especially with the ongoing mass bug reports.

Maybe not Community Moderator, as the way you worded it makes it seem easy to get it, and if people could get CM just by reporting something, abuse of power is bound to happen.

That badge already exists. You have to be picked by the Replit team after they notice you being active, reporting issues, inappropriate content. You can just report 10things and get it.

He might be talking about Detective, which is a completely different thing from the hypothetical badge.

The bug hunter badge doesn’t exist, maybe you’re confusing it with another badge

This could also be given to users that report bugs to Replit’s BBP.

Whats that? Or is my brain not working right now?

BBP: Best Buddy Pal? Idk my brain is fried at this point.

The Community Moderator badge is given to people who report inappropriate content and accounts, and I believe issues also.

You are correct (at least from my assumption)

Don’t quote me on it either, all my information was from a post I saw a few months ago on ye old repl talk about it from a moderator/admin (forgot) at the time.

No. The Content Moderator badge is for site moderators. It’s not based on reports or anything like that. It’s only for the actual site mods.